It’s that time of year again, time to begin preparing for Christmas in the Smoky Mountains! And what better place to start our holiday festivities than at our favorite Pigeon Forge amusement park, Dollywood.

Bigger and better than ever before, this year’s Christmas Festival at Dollywood will include a couple big changes that will make you want to visit right away.

New Dollywood Parade of Many Colors

The new Dollywood Parade of Many Colors is a $2.5 million addition to the Christmas festival. The parade was actually Dolly’s idea, to tie in her upcoming holiday movie, Christmas of Many Colors: Circle of Love.

The parade begins each night at 8 p.m. during the holiday season, from November 5 – December 30, 2016. The parade will include new holiday floats, characters and other surprises throughout the parade.

This year, 2016, there’s a chance to see the Dollywood parade in the 2 extra operating days! December 6 and December 13 were both added to the calendar, so don’t miss out!

Dollywood also added 2 new shows for this season – Christmas in the Smokies which is a new version of their show from other years and It’s a Wonderful Life which is brand new to the park.

What would Christmas be without a special appearance from everyone’s favorite flying reindeer. With a nose that is known the guide the way, you and your family are sure to find a ton of fun and excitement when following the path that leads to Rudolph.

A first for the Christmas Festival at Dollywood, guests are invited to come and meet Rudolph and his friends. Other characters making appearances at this year’s event include Clarice, Bumble the Abominable Snow Monster and Yukon Cornelius.

Guests can find Rudolph and his friends inside Rudolph’s Holly Jolly Junction. Be sure to bring a smile because guests will be allowed to take a souvenir photo to remember the event. 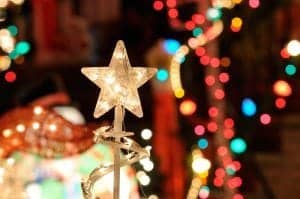 Speaking of fun places to take pictures at Dollywood, guests joining the Pigeon Forge amusement park or their Christmas Festival this year will enjoy finding a life-size snow globe where they can step inside and see the park from a whole new perspective.

You will not want to forget to bring your camera because these pictures will look great as the centerpiece of this year’s Christmas card or holiday photo album!

This year’s Christmas Festival at Dollywood will run November 5 through December 30. Guests will find a ton of holiday-themed activities located throughout the park.

Please keep in mind, during the Christmas Festival, Dollywood will be operating on their special holiday hours. Click here to check Dollywood’s operating hours for when you and your family plan on visiting this season.

When you’re planning your vacation this year, take a look at all of the other fun things to do in Pigeon Forge, too!