Gatlinburg is not only a popular destination for being on the doorstep to Great Smoky Mountains National Park but for all of the exciting things to do in town! While there are tons of fun attractions to choose from during your vacation, there are a few things you must do before returning home! Here is the ultimate bucket list of things to do in Gatlinburg: 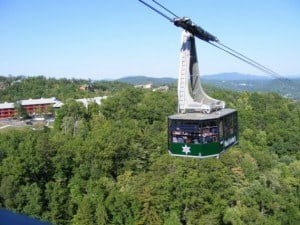 The Aerial Tramway to Ober Gatlinburg is a world class attraction that should be at the top of your list during your Smoky Mountain vacation! This spectacular ride takes you on a 2.1-mile journey from downtown Gatlinburg to the amusement park and ski area at Ober Gatlinburg. During your ride on the Aerial Tramway, you will experience a 1,500-foot rise in elevation and incredible views of the Smokies! There are two 120 passenger counter-balanced cars that depart regularly from the tram station at Parkway and LeConte Street in downtown Gatlinburg.

Another one of the bucket list things to do in Gatlinburg is the SkyBridge at Gatlinburg SkyLift Park! Your adventure starts with a scenic chairlift ride to the top of Crockett Mountain, which in itself is an iconic Gatlinburg attraction. Once you reach the peak, get ready to experience the longest pedestrian suspension bridge in North America. The Gatlinburg SkyBridge literally crosses the sky as it stretches 680 feet across the valley in a single span! The bridge reaches a height of 150 feet at its midpoint and there are even glass panels in the span to look straight down.

3. Ride the Rail Runner at Anakeesta 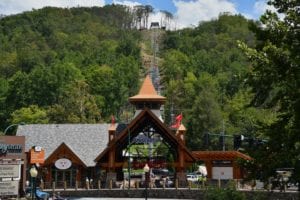 Gatlinburg is home to several thrilling mountain coasters where you control the speed of your own ride down the mountain, including the Ski Mountain Coaster, Gatlinburg Mountain Coaster, and Rowdy Bear Coaster. While we recommend trying each of these incredible rides, the one at the top of your bucket list should be the Rail Runner at Anakeesta. The Rail Runner is a unique single rail mountain coaster that is the first of its kind in the United States. After hopping into the driver’s seat, fly down the mountain through 1,600 feet of twists and turns at speeds reaching 25 miles per hour!

When it comes to the bucket list of things to do in Gatlinburg, you won’t want to miss a visit to Ripley’s Aquarium of the Smokies. This fascinating aquarium features more than 10,000 exotic sea creatures in 10 themed galleries, including a Shark Lagoon where you literally travel underwater via a glass tunnel! Some of the other popular exhibits at Ripley’s Aquarium of the Smokies include the Penguin Playhouse, Stingray Bay, Gallery of the Seas, and the Tropical Rainforest. 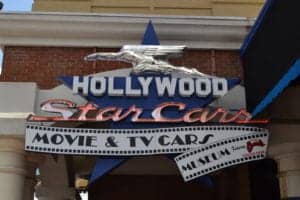 You will be pleasantly know you can experience a taste of Hollywood while visiting downtown Gatlinburg! The Hollywood Star Cars Museum offers an amazing tour through some of the most famous movies and television shows of the last 50 years. While exploring the museum, you will have the chance to see Hollywood cars such as the General Lee from the Dukes of Hazzard, the Back to the Future DeLorean Time Machine, and the Batmobile from the original 1966 hit tv show.

Wondering what you should do if you visit Pigeon Forge? Check out this bucket list of things to do in Pigeon Forge!

Now since you know the ultimate bucket list of things to do in Gatlinburg, check out all of the lodging options in the Smokies to plan your trip!