Founded in 1795 and incorporated in 1901, Sevierville, (pronounced Se-VEER-ville) was 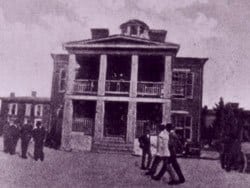 named for John Sevier, the first governor of Tennessee. It is the oldest and largest of Sevier County’s four cities and is the eighth oldest town in Tennessee. More than just a beautiful place for a vacation, Sevierville is a community with a proud heritage and history. One of its most enduring symbols is the classic white clock tower on the 105-year-old Sevier County Courthouse with a clock that strikes every half hour in the time-honored tradition. The statue of Dolly Parton on the courthouse lawn was sculpted by local artist Jim Gray and unveiled by Miss Parton herself on May 2, 1987, with her parents in attendance. There’s also a statue on the courthouse lawn in remembrance of our veterans. About 200 years ago, Sevierville was no more than a small rural community with one church, two mills, one tavern, one trading post, two lawyers and a stable for a courthouse. It was a stopping off point for settlers heading West toward the frontier, and as East Tennessee was settled, Sevierville became an important trading and commercial city. The city celebrated its bicentennial in 1995.  Sevierville, the county seat of Sevier County, is the first city many people see when they arrive in the Smokies. Just minutes from Pigeon Forge, Gatlinburg, and the Great Smoky Mountains National Park, Sevierville combines a relaxed hometown atmosphere with ready access to hundreds of vacation attractions and recreational opportunities. Over the years, Sevierville, as the county seat, has known five different courthouses, with the last being built in 1895-96 for $22,000. The courthouse was later renovated in 1970-74 for $577,000 and placed on the National Register of Historic Places.

Sevierville is located in a picturesque valley at the foot of the Smokies. Take Exit 407 off Interstate 40, about 18 miles east of Knoxville. For a more scenic route, try U.S. 441 South from Knoxville or 441 North from Cherokee, N. C. U. S. 411 also connects through Sevierville and provides a journey through the East TN foothills. Knoxville’s McGee/Tyson Airport is about an hour away, with over 90 commercial flights a day. The Sevierville-Gatlinburg-Pigeon Forge Aviation Center can accommodate a variety of private aircraft and has full service and maintenance facilities.

Sevierville has preserved its southern charm and the quaint personality of a small, historic town. The atmosphere in Sevierville is friendly, relaxed, and fun. . And the entire downtown area encompasses Sevierville’s historic district, where a walking tour unfolds the history of the nation and its expansion westward.Sevierville also keeps the modern traveler in mind, with accommodations ranging from family motels to romantic mountain hideaways. Shopping is some of the best in the Southeast. Offerings range from mountain crafts to antique emporiums to outlet malls featuring famous brands.There are restaurants for any taste, from fast food to fine dining, and outdoor activities include tennis, horseback riding, whitewater rafting, and golf.

Sevierville is one of those rare cities where you can honestly say that it’s a nice place to visit — and live. It’s often been called “your hometown in the Smokies.”