When touring Cades Cove of The Great Smoky Mountains of TN, you will drive along an 11-mile loop that follows many of the curves and courses that settlers forged years ago. Cades Cove is a lush valley surrounded by mountains and one of the most popular destinations in the Great Smokies. Along the way, you will likely come upon wildlife, such as the white-tail deer, wild turkey, groundhog and an occasional black bear. The Cove takes visitors into another time, experiencing heritage in each building and wilderness around every turn. 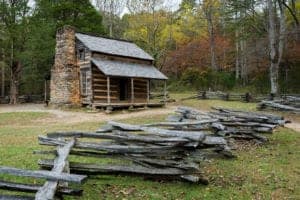 Settlers came to this area in 1819, migrating from Virginia. Later, they came from North Carolina, enriching their culture from the old world with knowledge gained from the Indians. By the 1850’s the population of Cades Cove peaked at 685, occupying 137 households. With this population growth the soil quality deteriorated. The opening states of the West brought the opportunity of more fertile frontiers and by 1860 only 269 people remained.

Though this is a driving trail, you must get out of your car and experience the tranquil beauty of the Cades Cove hiking trails, wildlife and scenery. Please remember on your visit that the wildlife is wild and it is unlawful to attempt to feed animals. For your safety and the safety of others, do not climb over fences or leave gates open. And please do not drive on or in the fields. Below you will find some information on what the Cove has to offer.

Stops Along the Cades Cove Loop

Click here for a printer-friendly PDF version of this map.

The Olivers settled into Cades Cove in 1826. This home remained in the Oliver family in Cades Cove until the park was established in the late 1920s.

Taking a left you can visit the Primitive Baptist Church. Early settlers established this church in 1827, with only a log building to serve the community until 1887. During the Civil War, public unrest shut the church down.

Back on the loop you will see the Methodist Church. This building and its furnishings were reportedly the work of a single man, J.D. McCampbell. A blacksmith and carpenter, he built the church in 115 days for $115. He later became a preacher; serving the area’s Methodist population and doing away with the use of circuit preachers for this less dominate faith. 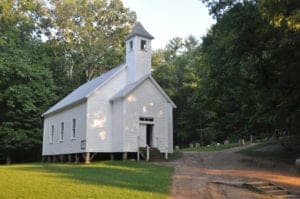 Just after Hyatt Lane you will find the Missionary Baptist Church. This church was formed in 1839, when members of the Primitive Baptist Church were dismissed for favoring missionary work. This structure dates from 1894, beginning with a membership of 40 and eventually rising to an enrollment of 115. During the Civil War the church failed to meet for services, but reopened following the war minus Confederate sympathizers.

To the right you will find Rich Mountain Road. Once an Indian trail, this road was built by the state of Tennessee in the 1920’s. This 12-mile long trek takes visitors to the park boundary. Here, a remarkable view of the Cove awaits from the top of the path.

Just ahead is Cooper Road Trail. This trail once served as a path for wagons, but today it is a 10-mile hiking trail that ends near the Foothills Parkway.

At the end of a half-mile hiking trail you will find Elijah Oliver Place. Surrounded by a smokehouse, barn and springhouse, this home takes visitors back to a different time. The springhouse looks down on the rest of the home, offering a clean water supply and insuring what modest sanitation was available.

At the next stop you will find the Cable Mill Area. This area features the Cades Cove Visitors Center, the blacksmith shop, cantilever barn, smokehouse, Gregg-Cable house, the corn crib and the John Cable Barn in Cades CoveMill. The mill is still working and visitors can stop in and sample or purchase corn mill and flour as our ancestors once did. This is a must-stop for visitors to the Cove. 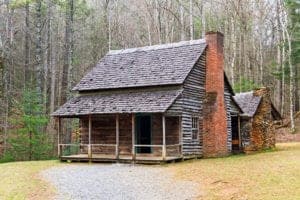 On up the trail you will find Henry Whitehead Place. Built in 1898, this log house and surrounding dwellings are an example of the roughest and finest log construction in the Smokies.

If you feel like stretching your legs a bit, try Cades Cove Nature Trail. This half mile loop takes visitors into the woods to experience how a settler’s family would forge for necessities.

Just ahead on the right you will find the Dan Lawson Place. Built around 1856, some of the better blade work of the time is represented in this home. Small outbuildings served as family pantries, also used as a granary and smokehouse.

You can also stop at the Tipton Place. “Hamp” Tipton had this home built shortly after the Civil War. The long shed on the opposite side of the house is an apiary or bee gum stand, offering honey as a common confection.

As your tour of the cove comes to a close, you will see the Carter Shields Cabin nestled near the end of the loop. Another example of craftsmanship in the area, this small cottage offers visitors one last opportunity to step out of their lives and into the past.

Cades Cove is also home to one of the most popular campgrounds in the Great Smoky Mountains National Park! It’s one of the few campgrounds that is open year-round. For more Cades Cove camping information, click here.

To get an idea of where Cades Cove is located, take a look at our map of the Great Smoky Mountains National Park, then follow the directions below.

Turn at Traffic light #3 onto Wears Valley Road and take 321 to Townsend. Turn Left onto highway 73 and go until you see a sign for Cades Cove where you will turn right onto Laurel Creek Rd. This road runs straight into Cades Cove.

Take 441 toward the National Park and Turn at the Sugarlands Visitor Center.  From here you will take Little River Road to Laurel Creek Rd which runs straight into Cades Cove.

Driving Distances from Nearby Cities: